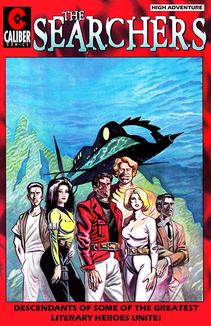 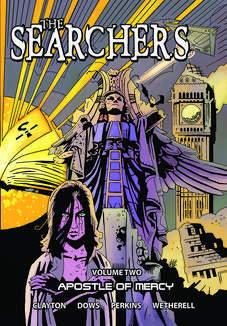 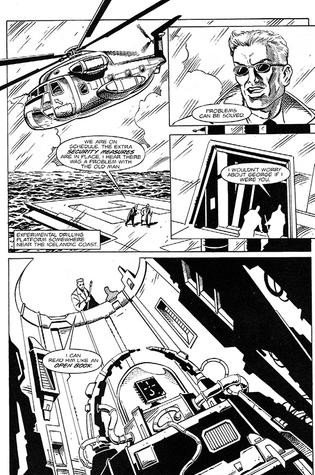 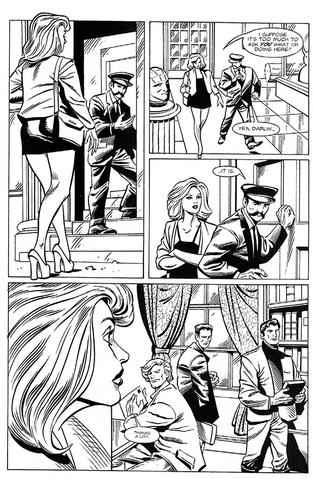 In the tradition of:

The Island of Dr. Moreau

But updated to fit into today’s world comes a new team of explorers...THE SEARCHERS

Before there was a comic book Golden Age, before there was a Silver Age, there was the age of stories. The greatest novelists of Western Civilization brought tales of adventure, space exploration, and the farthest reaches of the unknown. But what if those worlds actually existed?

This is the world of The Searchers. A world where fiction has become reality.

In the winter of 1896, H.G. Wells, Jules Verne, Sir Arthur Conan Doyle, H. Ryder Haggard and Edgar Rice Burroughs wrote of something so fantastic and unthinkable, no publisher would have entertained its submission. And yet the world-changing events they detailed in secret diaries were nevertheless absolutely true. A century later, real-life descendants of their greatest characters have banded together in a mutual quest for not only their very own survival, but that of reality itself.

In the "Searchers" world, those fictional figures were real. Here a Captain Nemo really sailed a submarine christened the Nautilus...here an Englishman really built and piloted a craft that traveled through the fourth dimension of time...here another Englishman named Fogg traversed the globe in 80 days...and here a man dared to journey deep into the earth's core. Here too, are the events that carry a darker tone for this is a world where an obscene vivisectionist called Moreau experimented on humans and where a scientist fell to both invisibility and madness.

As our story opens, a confrontation is unfolding in a modern day secret facility. George Challenger, from Arthur Conan Doyle’s The Lost World, is making clear he no longer wants anything to do with the shadowy organization the MIP, otherwise known as the Ministry Of Incredible Phenomenon. Storming out, he covers his tracks by burning his car and enters his own secret facility, where it becomes clear he has plans of his own.

The story now backtracks approximately 110 years. Crossing the courtyard of the British Museum is none other than H.G. Wells, summoned to a mysterious meeting by Charles Fort, the famous collector of all things weird and supernatural. Wells finds himself in good company. Already at the meeting are Jules Verne, Edgar Rice Burroughs, H Rider Haggard and Arthur Conan Doyle. Fort spins a fantastic tale to the gathered authors, claiming to have obtained a mystical book, the Book Of Khazars. Verne scoffs at the claims, but when Fort opens the book, such is the power of the literary minds assembled, that their very thoughts are given form. Each sees a manifestation of their greatest ideas made real, including for Wells, a Martian Tripod.

Back to the present, and across the world, a number of seemingly unconnected people receive letters summoning them to a meeting in England. When they arrive, they discover their host is George Challenger, and he has extraordinary news for them. Each of them is the actual descendent of a literary character. Kane Talgarth is a descendent of Captain Nemo (from Verne's 20,000 Leagues Under The Sea), Edwin Van Hardwigge can trace his ancestry to Professor Von Hardwigg, the expedition leader in Verne's Journey To The Centre of the Earth, while Geneva Walcott-Fogg is related to the Fogg of Around The World In Eighty Days. John Hammett is related to The Invisible Man, a creation of H.G. Wells, while an uninvited addition to the team is Moriarty, a beautiful and deadly descendent of the arch enemy of Arthur Conan Doyle's Sherlock Holmes.

These incredible people owe their very existence to the last time the Book Of Khazars was opened, which allowed their ancestors to escape into our reality. Now George tells them that the MIP has possession of the book, and intends to re-open it, with potentially deadly consequences for the world. This then is the set up for the Seachers. Our heroes must set out on a quest to stop the MIP, meeting other literary characters along the way, and ultimately finding themselves in possession of the Nautilus from 20,000 Leagues Under The Sea which is found trapped in the Arctic Circle.

The first story arc of Searchers which introduced the team came out as a four issue series. It was followed by a second mini-series which ran two issues, 48 pages each and was entitled Searchers: Apostles of Mercy.

Brief Description:  The Searchers are a team of adventurers but with a unique twist.  The members are all descendants from legendary figures of adventure fiction.  As they are thrown into their greatest adventures, they also have to deal with the fact that much of the world thinks their ancestor's exploits didn't happen!

Key Elements:  A limitless palate of adventures are possible in the Searchers.  Combining the elements of classic literature but updated to fit in today’s world. Pre-existing globally recognizable characters audiences will be familiar with.

Association:  The Searchers will appeal to any fan of the great classics of literature that still form the nucleus of even today’s movies and comics.  With a modern setting, allowing a greater diversity, The Searchers is a project that is capable of going anywhere and everywhere.

Format:  Although the concept of the Searcher’s members striving to determine their place in the real world is a fascinating one, the possibilities of extending the concept into ongoing adventures obviously holds an even greater appeal.  Building off the original concepts and the characters’ assimilation into their fictional ancestral counterparts leads to an incredible range of diversity and adventure.

Additional:  Utilizing The Searchers allows a manipulation of mixing into tried and tested winners of some great classics…classics which have created the genre of action, adventure, and science fiction. As well as exploring story threads of those classic books and how they may exist in today's world.

"Searchers is the comic book I have on the wall with a sign reading- ‘Love books? Never read a comic? Try this one!....money back guarantee…’" - Dark Star Books, Yellow Springs, Ohio

"Searching for an exhilarating and original concept in a comic book? Look no further, because Searchers is here!" - Claude’s Comics Hatboro, PA

"Long before League of Extraordinary Gentleman came along, Caliber's Searchers had introduced the great concept of bringing these fictional characters to reality." - Psycho Comics

Brought into our reality when the Book of the Khazars was originally opened by The Ministry of Incredible Phenomena, George Challenger stays true to his literary self - abrupt, brazen, arrogant yet brilliant, and known for throwing people down the stairs if they do not agree with him. Forever battling with his fiery temper, Challenger carries the curse of knowing the true nature of their reality and the fragility of existence itself. As the founder of The Searchers, the agenda he follows may not always appear to account for the welfare of others, although he would claim his actions are for the benefit of all mankind.

Great-grandson of Captain Nemo, Talgarth is the archetype dark and swarthy square-jawed, although not necessarily clean living hero. Unknown to him, his character is not as clear-cut as he has always thought - the Nemo bloodline carries gifts of genius along with less favorable traits, which leads Talgarth into an increasingly confused moral code. An excellent pilot and survivalist, Talgarth has only really scratched the surface of his true powers, a potential that leads to him surprising himself.

Prone to acts of extreme violence and depression, the wiry and resilient Hammett is virtually the same as Griffin, his mad scientist Great-grandfather. However, he has a very strong moral code and even though he is unstable, there is a strange consistency and predictability about him. The invisibility gene is directly linked to his emotional state, but its relationship is complex and Hammett is yet to understand it. Brave and outspoken, he struggles to guard his true feelings, living in denial against that which he instinctively knows is right - such as Challenger's cause.

Hardwigge’s looks belie his true nature - to see his six foot eight inch huge frame, one would expect this descendant of Harry Hardwigge, adventurer and explorer, to be a menacing, threatening presence, but nothing could be further from the truth - powerful certainly, but totally honest, good-natured, softly spoken and a true Gentleman, Edwin is a brilliant hands-on engineer whose eagerness to dismantle things often leads to short-term problems. He has never been pushed or properly tested in his life, but, as part of The Searchers this is sure to change - his subsequent reactions may cause some raised eyebrows...

As a person, Geneva was quite content with who she thought she was - brattish, spoilt girl around town, living on the trendy fringes of London's club scene - until she encountered Challenger. After a soul-shattering baptism of fire, acceptance of her true self (Great-granddaughter of Phileas Fogg) and talents slowly came about through a violent journey of self-realization, adding a strong inner belief in who she really is to her blonde and beautiful exterior self. She wants more out of life and, unlike once, will work with others to get it.

Dark, sexy and stunning, Moriarty is a “bad girl” in more ways than one - she knows how to use her undeniable charms to manipulate just about anyone she wants. However, her beauty hides her real nature - pure, unadulterated evil and megalomania, a brilliantly sharp and ruthless mind that will stop at nothing to further her own destructive and desolate ends. If anything, she is more formidable than Holmes' nemesis, her Great-grandfather Professor Moriarty. She is a time-bomb ticking away, using her high visibility to cover her real, personal agenda.

Like her Great-grandfather, Moreau, is the consummate scientist - methodical, totally dedicated and almost mechanical in her thinking. She is the result of not only her genetic make-up, bout of an oppressive and restrictive upbringing. Science, in particular genetic engineering, is the total and only goal - even the purpose of the work does not matter, as the pursuit of the finished experiment is all she lives for. Life, love, emotions are nothing to her - only that which can be dissected, examined and replicated are important. Her own mutation in the form of totally black eyes are a result of Moreau's own experiments on his own children, and this detached callousness continues with her - until, that is, she meets Geneva...

Tom Eden is an unstoppable force with nowhere to go. A total megalomaniac, all he really wants to do is destroy things - from the air. He is apolitical, amoral and just wants a good fight. The fact that he has stolen the most advanced fighter aircraft on Earth and is descended from Robur, the original master of the skies, makes him a very dangerous and unpredictable man, who acts on the merest whim with no thought for any consequences.

The Time Traveler is, like Challenger, also an original character brought to life by The Ministry but while many of the others were hunted down and drawn back into the Book, the Traveler wisely escaped with his now real Time Machine. But events since his arrival in this reality have made him a haunted, isolated figure, who has had to act against his tremendously strong Victorian morals to ensure the safety of the world which has been plunged into danger because of his very existence. Using every ounce of his tremendous energy and intelligence, he is walking on eggshells through time, awaiting an attack he knows must come and he must face, if he is ever to have a chance of finding his beloved Weena. 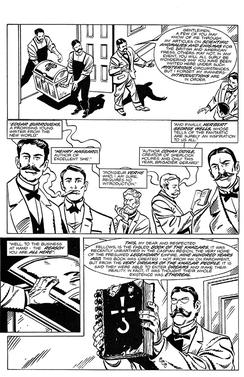 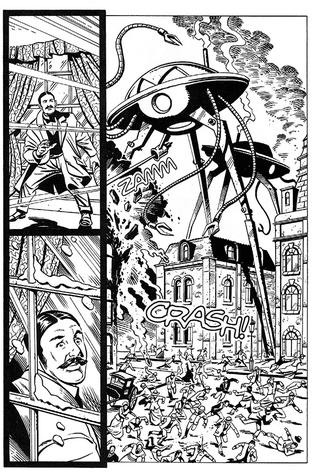 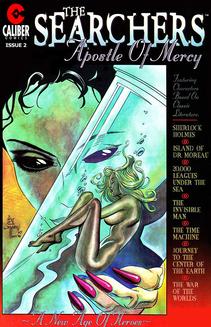 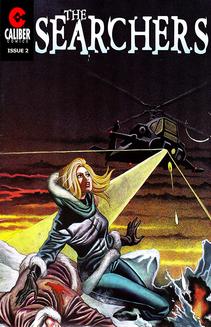 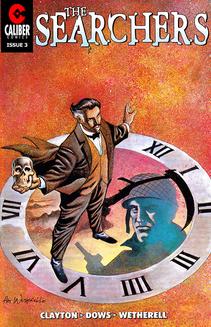 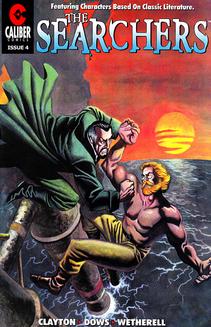 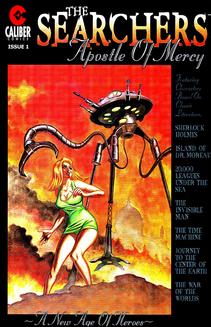 Years before League of Extraordinary Gentlemen came to print The Searchers burst on the scene with its imaginative take on the descendants of the Literary World's greatest figures. 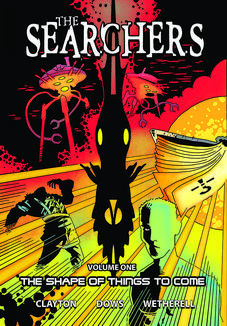