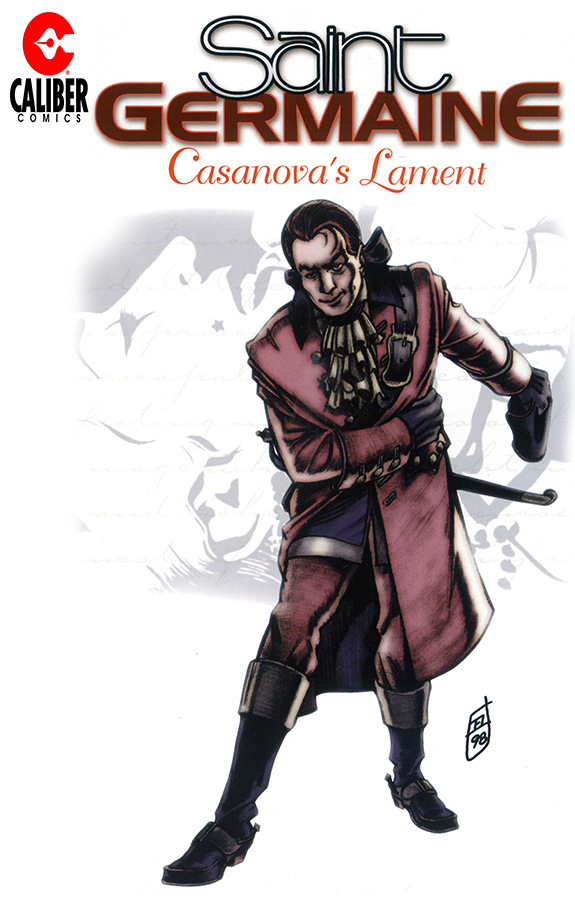 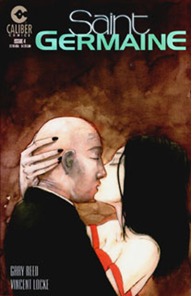 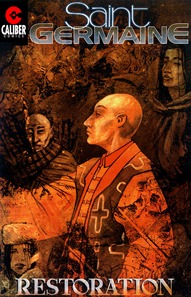 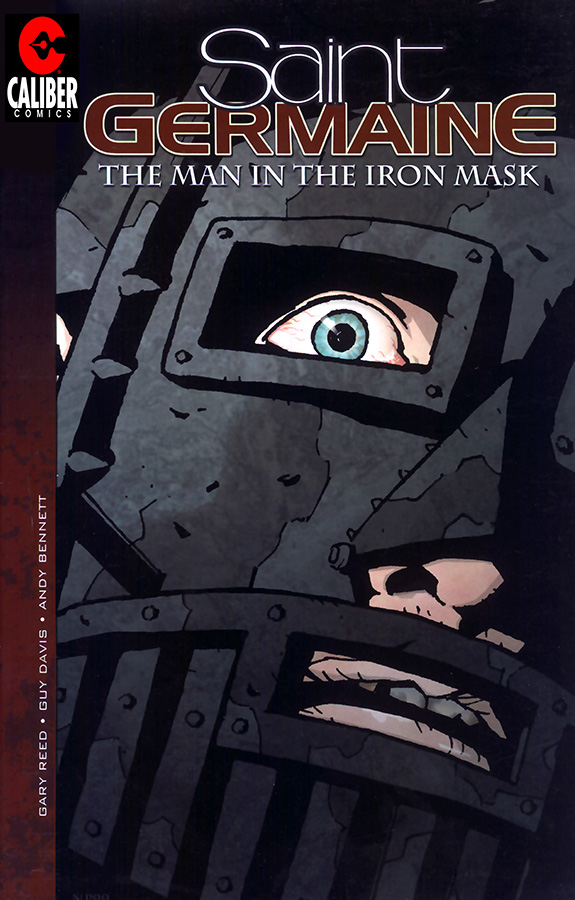 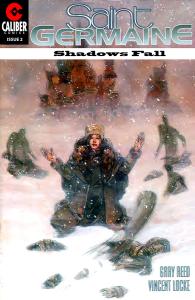 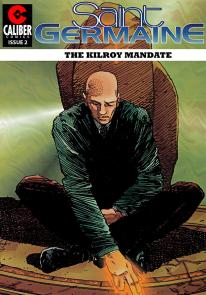 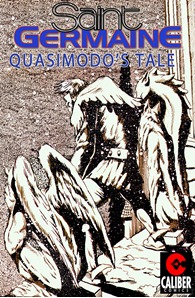 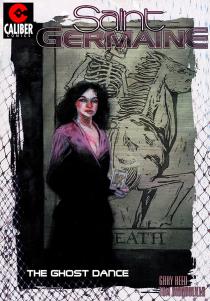 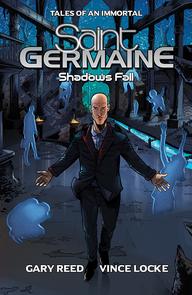 With a touch of Highlander. 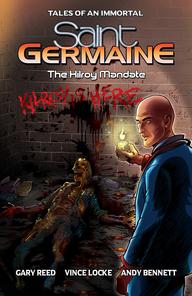 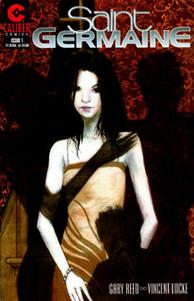 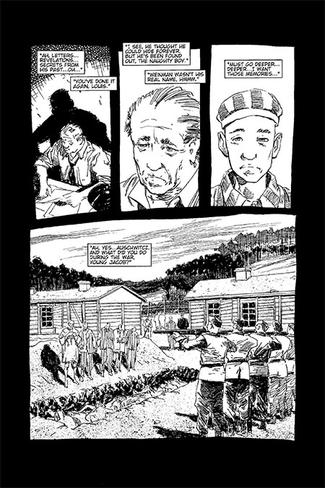 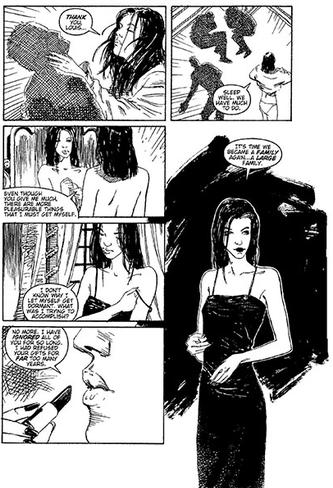 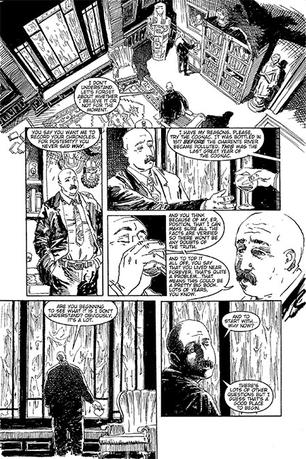 He is a being who claims immortality yet has died a thousand deaths.

He has traversed the paths of mankind for untold years.

He is the purveyor of light in a world slowly being consumed by shadows.

He is Saint Germaine and death to him is nothing more than a state of consciousness.

What do you do for excitement when you’re an immortal.  If you’re Lilith, a being who has existed for centuries, you feast on the memories of normal, living people.

And if you’re Saint Germaine, you devote yourself to keeping the balance between the light and the dark.

It is a legendary name. Long associated with being a magician in the era of the Mages, the legacy of St. Germaine lives on in such mysterious organizations as the Knights Templar and the Masonic Brotherhood. Revered by men such as Casanova and Cagliostro, even Frederick the Great called him "The Man Who Could Not Die."

Part of the Saint Germaine storyline is the love/hate relationship he has with his longtime lover, Lilith.  She steals men's minds with her shadow creatures that suck up their memories and feed her the nourishment of remembrances.  In her desperate attempt to understand life, she tried her best to join the human race, only to watch as her loved ones died in her arms of old age.  She blames Germaine for making her what she is...and now, she wants to take revenge.  Can even Saint Germaine stand against her army of shadows?

Brief Description:  A compelling series of a man who claims he has lived forever.  He serves as a protector of light against a world of darkness, a world inhabited by many strange beings such as he.

Key Elements:  Can cover a wide array of different subjects from horror to historical along different time periods.

Association:  Mix the key elements of Quantum Leap with X-Files and you can get a good idea of the potential.  Add something like Millennium as the dark side of mankind is explored and it’s easy to see that Saint Germaine can move in a lot of different directions.

Format:  A regular series with 10 issues published.  Plans are to do a variety of specials that will feature Saint Germaine in a specific time period piece in longer stories.

Additional:  Saint Germaine is one of Caliber’s most acclaimed titles released.

“-Eclectic, dense with meaning, and by no means a quick or easy read, the comic takes its pleasure in not explaining the alpha and omega of its main character. The result is a character we do not completely understand with a history we cannot penetrate---in short, the most intriguing immortal in comics since Neil Gaiman's Hob Gadling." - Barry Lyga, Diamond Comics, Under the Reading Lamp

“A jewel of writing and design… a work that dares to dream…” - Lino Terlichi, Drive Magazine

“This is more than a winner, Saint Germaine is a stunning example of the power of the medium. It should be exalted." - John L. Kruze

"… taken alternate comics into the next level of storytelling. I am in awe." - Jazma Online

"Saint Germaine from Gary Reed has to be one of most powerful things I've ever read. Outstanding, simply outstanding. They don't get any better than this." - Alicia Simmons, Fiction World 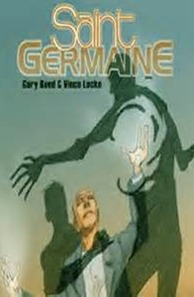 Who is Saint Germaine?

Some excerpts and summations from Encyclopedia Britannica:

“....called de Wundermann (The Wonder Man), a celebrated adventurer.  Of his parentage and place of birth, nothing is definitely known.  He knew nearly all the European languages, and spoke German, English, Italian, French, Portuguese, and Spanish.  Grimm affirms him to have been the man of the best parts he had ever known.  His knowledge of history was comprehensive, he was a musical composer, capable violinist, and his accomplishments as a chemist...real and considerable.

He has been called an Italian, a Spaniard, a Pole; a somebody that married a great fortune in Mexico; a priest, a fiddler, a vast nobleman.  He was employed on secret missions by Louis XV (in France), interfered in the dispute between Austria and France, was at St. Petersburg and was involved in placing Catherine II on the throne of Russia, he then went to Germany, where according to Cagliostro, he was the founder of Freemasonry.”

The first four issues featured the introduction to Saint Germaine.  Utilizing Manny Chancu of Raven Chronicles as a writer, we are introduced to the world of Saint Germaine and his longtime companion, Lilith.  Claiming immortality, Saint Germaine has ceased to find life worthwhile and is contemplating his death, hence the opportunity for Manny to write the “memoirs” of Germaine.  However, once it’s discovered that Lilith still survives, Germaine has a renewed interest.  Throughout the four issue series we find the origin of Lilith and trace some of Germaine’s exploits in such historical settings as the Spanish Inquisition, the fall of Stalingrad, and the early days of America’s twentieth century.

Manny is given a “tour” of the historical aspects within Saint Germaine as he witnesses deaths and images of many people such as Bosch, Descartes, and Kafka.  Scenes depicted here include the fall of Khartoum, Napoleon’s invasion of Moscow, the Salem witches, and the Templar Knights.  Although brief scenes, this one shot issue gives an overview of the many different areas that Saint Germaine has come across.

Saint Germaine has seen a lot in his long life but is even he prepared to see the wrath of an avenger unleashed?  As the mysterious figure known as Kilroy plunges into the darkness of retribution, Saint Germaine must make a decision that could violate his own principles.  As Kilroy attempts to understand the evil which he is trying to rid the world of, he and Germaine travel to an unknown place to see the rise of Josef Stalin, Shaka-Zulu, and take a glimpse at the predicted third Anti-Christ.  But the secret of Kilroy goes much further than that as Germaine shows Kilroy the very beginning of his reign as the avenger of innocence.

Saint Germaine and a mysterious Tarot reader describes firsthand, the Sioux Indians’ Ghost Dance which led to the final episode of the American Indian and essentially, ended the Indian Wars.

“Man In The Iron Mask”

The immortal Saint Germaine helps out a tormented soul who is a prisoner doomed to live his entire life in captivity.  The imprisonment is not for a crime committed but because of who he is and the threat that he represents to the French Crown. Germaine provides a brief glimmer of life for the prisoner before death comes to claim him forever.

“The Tragedy of Falstaff”

Based on the immortal character created by William Shakespeare, Falstaff is one of his most tragic characters. Saint Germaine hears the tale of woe from Falstaff.  Formerly an influential force with the young Prince Hal, Falstaff is ostracized by Hal when he assumes the throne as King Henry the V.  While Henry prepares for his epic battle at Agincourt which led to the eventual unification of his kingdoms of France and England, Falstaff must stay behind.

Saint Germaine chronicles the life of one of Europe’s most famous adventurers…the vagabond lover who infected the high courts with his charm, wit, and persuasive manner.  His claim to fame included his many affairs, his escape from a Venice prison that was deemed inescapable, his frequent ventures into spying, his service as a monk, and the fateful duel that finally catapulted him to the rank of “gentleman of the court”.  It is a story that you only thought you knew.  A valuable friend of Saint Germaine, we witness the unfolding of one of history’s most fascinating characters whose life was both tragic and uplifting….Casanova. 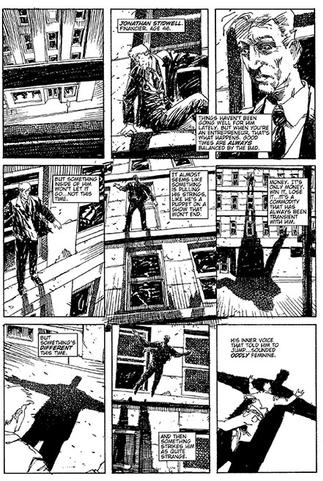