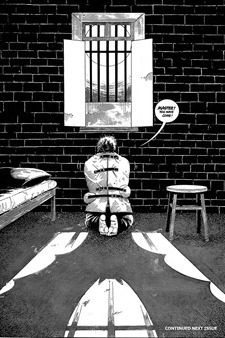 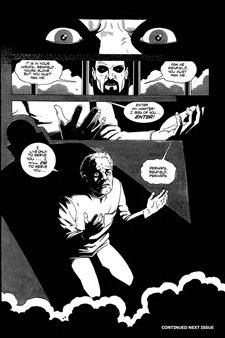 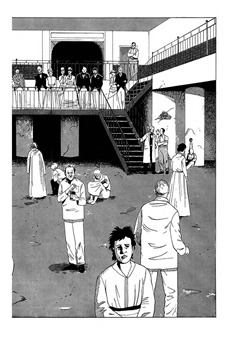 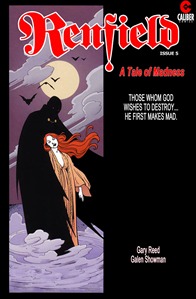 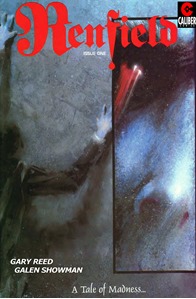 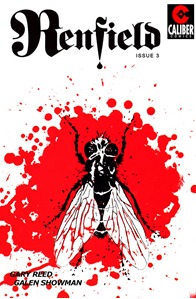 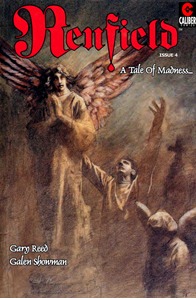 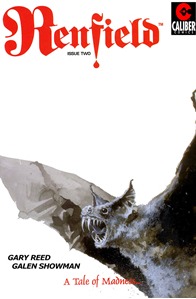 “Those whom God wishes to destroy…He first makes mad…..”

Renfield is the story of the bug eating inmate depicted in Bram Stoker’s classic Dracula novel. It centers on a man who is slowly being consumed by madness because of the visions and voices that intrude upon his dreams and nightmares. While the events from the Dracula novel swirl around him, Renfield faces his pre-ordained task of preparing for his mysterious “master” and he struggles to understand what his “messiah” is asking of him. Upon discovering that Dracula is offering him eternal life, Renfield realizes that for beings such as Dracula to live, others must die. Renfield must decide between immortality or humanity. He cannot have both. Though centered on Renfield we are still introduced to all the main characters of the Dracula story. But seen from Renfield's point of view as his story's events run parallel to the events within Stoker's Dracula.

In this haunting and sophisticated mini-series, Renfield tells a tale of madness as it delves into the story of the bug eating prophet of Bram Stoker’s Dracula. In the original novel, Renfield was the insane inmate who foretold the coming of the evil vampire and served somewhat as a disciple of Dracula. This story explores not only the relationship of Dracula and Renfield but the torment that Renfield felt as a man possessed by almost demonic forces. Impassioned with the zeal of a religious fanatic, Renfield struggles to grasp the overwhelming need to serve the darkness against his humanity. Staying true to the original story in chronological order and events, the comic storyline focuses primarily prior to Dracula’s actual arrival in England.

As Renfield is slowly being consumed by the madness because of the visions and voices that intrude upon his dreams and nightmares, he must try to understand the mysterious message that his “master” or “messiah” (Dracula) is asking of him. Upon discovering that Dracula is offering him eternal life in exchange for servitude, Renfield comes to grasp that in order for a being like Dracula to live, others must die. This includes Mina Harker who Renfield reveres and this conflict throws Renfield into an internal struggle of the darkness of immortality against his own humanity.

The graphic novel version of Renfield takes the story concerning the "madman" to its roots. It is a story of love and a story of one man’s redemption. It shows how one man is driven to a madness he doesn’t understand, forced to serve a master that he can’t comprehend, and slowly watches as his very humanity is stripped away.

Within the graphic novel, the sequences follow the original novel. It covers most of the same events, incorporates many of the major scenes. It is as if it were a part of the novel that was removed and now is re-inserted. It does not contradict anything in Stoker’s work, only adds to it.

The character of Dracula within the comic is crucial of course; however, Dracula is not the central character visually. In fact, throughout the comic, the name of Dracula is never even mentioned. This story centers of those who have been impacted by Dracula and although he serves as the vortex of all the events, this is not a typical “Dracula” story.

Two underlying themes develop as the story progresses. Obviously, one theme is that of a man trapped in madness, struggling to grapple with something unknown to him. The visions that Renfield sees are those of Jonathan Harker’s as if Dracula were allowing him to peer into the hidden sanctuary of the horror that Harker faces.

But stronger than the madness theme is that of a growing love for Mina Murray who eventually marries Harker. The lily flower is a symbolic use to show Renfield’s growing love for Mina. The lily represents the purity and innocence that Mina represents and somehow, deep inside, Renfield recognizes this even while fighting the darkness that has overwhelmed him. Renfield’s love for Mina is not a possessive one, in that he is not “courting” her but rather a love of humanity that she stands for. It is not Mina per se that he is willing to give his life for, but what Mina represents...humanity.

Brief description: Renfield is the saga of a man driven insane by the need to serve his Messiah who is actually Dracula. A tie-in to the classic novel, the story of Renfield is the story that writer Bram Stoker seemingly 'left out' of his novel.

Key Elements: A psychological horror story that explores a man who is going crazy for the love of his god (Dracula) yet it is love for humanity that will redeem him.

Association: Renfield will appeal to all fans of the Dracula/vampire mythos which has one of the largest followings of any genre. While (naturally) touching on vampirism, Renfield avoids the pitfalls of the blood lust that is too common seen. Would appeal greatly to women such as Twilight or Interview With a Vampire did because it shows the human side of the torment and how love will rescue a soul.

Format: Released as a comic series and later collected into a graphic novel trade paperback.

"Renfield is more than another tale meant to scare like some bad B movie, but rather a horror story that transpires in the mind both for the character and the reader." - Lance Eaton, BookLoons

"Renfield is a nifty little horror comic that relies on atmosphere and gathering tension rather than gore, as all good horror comics should." - Greg Burgas, Comics Should be Good

"Too often in comics, horror means gore and mayhem. Just because there are vampires and zombies roaming around does not mean that you have a horror comic. Horror should have real suspense. It should make you feel uncomfortable as you read it. Most of all, it should scare you long after you put it down. Renfield: A Tale of Madness...does all of these things." - Sean McGurr, Graphic Novel Journal

"Renfield calls Dracula his master, but I must say that Gary Reed proves that he is the master of storytelling and Renfield proves it!" - Paul Dale Roberts, Jazma Online

"Reed is a very literary comics writer, one with a very sound base in much of the classic literature that inspired comics. That often helps give Reed's writing a real feeling of depth and power." - Jason Sacks, Silver Bullet

"I must begin by crediting this book for achieving its primary goal, which was of course to expand and further explain the character of Renfield. It does so interestingly, and at times, admirably. It also demonstrates the authors' knowledge of, and respect for, Stoker's masterpiece. Showman's artwork is effective and almost perfectly appropriate." - James E. Pendergrass

"Spotlight of the Month" - Advance Comics

"As the story unfolds, we see Renfield dealing with this prophecy that he has been saddled with and the decisions he must make. I picked this up because I read a review that someone wrote saying it was the most intelligent graphic novel they had ever read. I would have to agree...maybe not the most intelligent but certainly up there." - Reader's Review

Rating: 10 out of 10.  "...a rare treat; a truly classic piece... Whether you're a horror buff, a comics fan or just one who enjoys this chunka reading format, you're in for a treat if you pick up this book. It's a rare treat; a truly classic piece set in a graphic format. Reed's writing talent shines, as does Showman's stark art style, meshing into a truly dark tale. Taking an underutilized, yet pivotal character from Bram Stoker's classic DRACULA, he is turned into a central character in his own right, taking him into a downward spiral of his own hell. Without Renfield, none of the famous events of Stoker's novel could have occurred, & this addition meshes with the original as if Reed had traveled back in time to discover undisclosed aspects of the original intent. In my opinion, the original feels incomplete without this addendum. Now the full tale has been told. I thank Mssrs. Reed & Showman for their service. A "MUST HAVE" for the serious comics fan. Get out there & get YOUR copy.” -  Dimestore Reviews

Rating: 5 stars (out of 5 possible) "A must have for any serious sequential graphic narrative (comics) fan. Originally published by Caliber Comics as a limited series, this graphic novel stands as one of indy press's seminal achievements. Image comics should be praised for their reincarnation in this format. Using Bram Stoker's classic novel DRACULA as a springboard, Reed takes an underused, yet pivotal, character from Stoker's tale fleshes out his near skeletal use, turning him into a central character in his own right. Without Renfield none of the events set down in Stoker's story would have transpired. Here, Reed explores Renfield's motivations their tragic results to the doomed recipient of the nefarious Count's schemes. The story meshes seamlessly with the original work, seeming to read between the lines Stoker penned. Indeed, the original seems incomplete without these additional chapters. Now the full tale is told. I had the great fortune of reading it all.” - Independent Propaganda

“The madman philosopher who so briefly haunts the pages of Bram Stoker's classic horror novel, Dracula, comes to full life in this dark and chilling parallel tale of Dracula's servant. Renfield, the mysterious and tragic bug-collecting character, gets his own backstory thanks to the machinations of the gifted Gary Reed, whose talent for the macabre rivals that of H. P. Lovercraft and whose adept comic book storytelling matches that of Steve Niles. Building from the scenes witnessed in Dracula, this graphic novel creates an entire backdrop to Renfield's character from his arrest in a park and his admission into the Purfleet Asylum for the Insane to his final showdown with Dracula. Through the tale, readers will develop a soft spot in their hearts for the tortured soul as he battles with himself over his submission to Dracula. As the other characters - such as Dr. Seward, Lucy and Mina - appear, Renfield feels the impending appearance of his master and waits to receive the great gift from him, but can the thoughtful Renfield fully understand what Dracula is trying to teach him? Fans of Dracula will find this a great addition to their perspective of the novel in the tradition of Tad Williams' Caliban's Hour or Gregory Maguire's Wicked.” -  BookLoons

“RENFIELD sits alongside BAKER STREET as Reed’s best work in comics and makes a very worthy return to print and bookshelves. Track it down.” - Marc Mason, Comics Waiting Room

"...puts a new twist to the Dracula mythos..." - Comics/Animation Newswire