but geared for today's audience.

Trevor Straton, brilliant research scientist is in the middle of one of his experiments when his intellectual foe, Dr. Zatharius (Dr. Z) sabotages it and an explosion occurs.

For five months, Trevor hovers near death before he finally wakes.  But he finds himself attached to a giant reactor.  His associate explains it to him.

Trevor was involved in the blast of the radium electrodes and it infiltrated his body.   Incredible amounts of electrical radiation cursed through his human flesh but did not kill him.

But Trevor Straton is no longer human.  He is composed of energy that powers him.   And when it runs low, he must hook himself back up to the reactor for "recharging".

He is able to control the output of the different electrical radiation.  He can emit sonic blasts...shoot out beams through his eyes, shoot out large energy blasts, and with straining, he can even dispel enough to take flight.

A protective costume and goggles protects him from leakage and allows him to manifest the energy flow.  But Trevor Straton is no more......in his place is now... REACTO-MAN.

Brief Description: A laboratory experiment is sabotaged and Trevor Straton finds himself now composed of pure energy that he can harness with incredible power.

Key Elements:  Super hero based on atomic power, nostalgic look at heroes, mad scientists, damsel in distress...all the elements which made old time serials and comic books so popular.

Association:  A mix of DARK MAN with the ROCKETEER with elements of BATMAN BEYOND thrown in.  A great super hero property that doesn't take itself too seriously.

Additional:  With a zany cast of villains and possible development of side characters, Reacto-Man provides a perfect vehicle for a fun series with potential of merchandising. 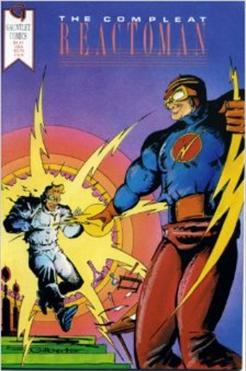