PITCH:  Hammer Family Racing is one of the last independent teams in the International Prototype Vehicle Association, the near future’s hottest sports league.  IPVA racers compete in every style of high-concept transportation in every imaginable location.  When a corporate team poaches HFR’s driver before a make-or-break race, co-founder and bossman Buckpitt Hammer stakes HFR’s future on hardscrabble amateur proto-racer Bryan “Risk” Daley.  Joining the ride is a twelve-year-old whizzer (engineering protégé) and chick-magnet who goes by Max Q.​

TARGET MARKET:  Fans of all ages who love globe-spanning adventure, science fiction, concept vehicles, racing, or futurism.  The cast of characters vary in age, backgrounds and personalities, so fans can find one or more that he or she can relate with.  The concept vehicles offer a parade of opportunities for merchandising.

SYNOPSIS:  Buckpitt and oldest daughter Monnarae, HFR’s Chief Financial Officer and Public Relations Officer, approach Daley to drive for them after a mag-luge race he ditches rather than win at the risk of inuring other racers.  Daley’s sacrifice leaves him with sore ribs, but he agrees to discuss the offer a few hours later.

Daley goes to a med-punkt in the Kirklington Lash-Up—a mid-21st century Hooverville he lives at—to get checked out.  While the owner, retired physician-scientist Aron Vayner, confirms Daley has bruised ribs, a spiteful neighbor who lost betting on the mag-luge race slashes the tires on Daley’s rattletrap pickup.  Daley cannot afford four new wheels, so Vayner suggests asking his neighbor Max if the boy has some retreads.  An apparent orphan living alone in the Lash-Up, Max is a scrounger par excellence Vayner has bartered with a time or two.

Max has retreads, but with the countdown for Daley’s meeting with HFR almost at zero, he offers to let Daley use his restored 1951 Buick concept LaSabre if he can tag along.  Daley acquiesces and to his relief Buckpitt, Monnarae, middle daughter Monica (a primo grease monkey suffering from neuromyelitis optica) and youngest daughter Mario (pronounced “Mary-Oh,” a tomboy and whizzer) like the precocious boy.  Daley also learns he was recommended by Henry “Swede” Nelson, a MIT gearhead who served with him in the Marines.  Swede and HFR are prepping a game-changing fuel-and-vehicle combo dubbed Slipscream for the upcoming TransPac Magway Ceremonial.  Daley drove, piloted, and helmed experimental vehicles in the service—including a classified forerunner to Slipscream—and if Slipscream can at least take third HFR should have investors pounding on their door.  If not, the team will go bust.

Meanwhile HFR’s former driver, Bernard Faber, is suffering buyer’s remorse at Competition-Pursuit-Concepts, the IPVA arm of SeaJax Corporation.  Faber was courting Monnarae, but his lucrative agreement was dependent upon his abandoning HFR without forewarning.  This condition came from CFO and President of Sports Operations (and one-time suitor to Monnarae) Coil Mason and SeaJax’s founder, Chief Executive Officer, Chief Research Officer, emperor of crime, and Mason’s father figure Dr. Alexandré Scattergood.  The signing dovetails with a scheme Scattergood is prepping for the Ceremonial, but the mastermind is currently more focused on a quantum experiment to verify time travelling particles in reality; however an oversight during the experiment triggers a dust explosion that demolishes Scattergood’s subbasement lab and apparently vaporizes him and an assistant.

The detonation is felt in the neighboring HFR campus, followed almost instantly by an explosion in a ravine on their property.  There they find an insensible eight year old boy lying near a small fulgurite impact crater.  Concerned the boy might be linked to the SeaJax explosion in a detrimental way, Daley enlists Vayner to examine him rather than call 9-1-1.  The boy is healthy, but has no memory of his identity or how he got in the ravine.  An empathetic Buckpitt offers to assume responsibility for the mysterious child until relatives can be located; a decade earlier his wife Myrna, an IPVA legend, was killed during a race before learning she was pregnant with a son.  Meanwhile he and Mario settle on a moniker for the boy: James-Michael or J-M for short.

Race Day arrives!  The TransPac is the first intercontinental magnetic levitation highway, spanning between San Francisco and Shanghai with artificial oases in between.  Its central oasis is Laysan Island, site of The Hub space elevator, which connects to Space Platform One, a geosynchronous station and resort.  All of this was designed, financed, and built by Scattergood’s one-time fiancée Adelene Pilot and her company Neo-Future Tech.  Other racers include Electric Skull (an independent marathoner in a high-tech exoskeleton), Medusa (the IPVA’s masked mystery woman and winningest racer) and Faber.  Apparent accidents plague the race, but Slipscream comes in second.  More accidents on SP1 after post-race ceremonies commence cripple it and The Hub.  While Faber and Monnarae confront each other and their feelings, the HFR crew tries to find a way to prevent SP1 from plummeting to earth. 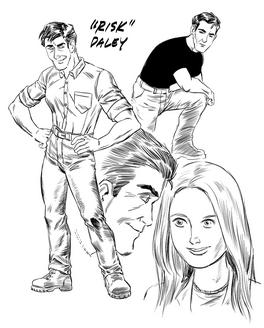 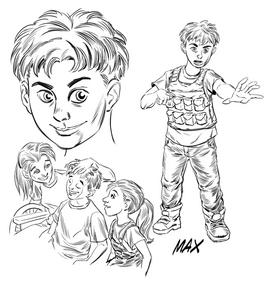