Published as a series of stories in Caliber Presents

In the tradition of The Twilight Zone, Gideon’s is an anthology series based around the concept of a pawn shop that has existed since the beginning of time.

The pawn shop is a small trinket business establishment and in the past, it could’ve been a village tent, a trader in a caravan, an outpost in the Wild West...but within any time period there has always been a Gideon’s.

In every land and in every time.

But these items usually carry much more of a cost than just the purchase price.

Often, it is a case of “you get what you paid for” but many times it may be because you didn’t quite know what you were asking for.

In any case, Gideon’s sells items...at a cost.

As for Gideon himself?  He never appears the same from one visitor to another.  But his daughter, Jezebel has always remained the same...since the beginning of time.

Gideon’s.  They have everything you could possibly want. But can you afford the price?

Brief Description:  Setting of a mystical pawn shop that exists in all lands and at all times that provides all sorts of items but for the customer at a price that can come at the ultimate cost.

Format:  Based on the long running series of short stories that have appeared in various short story forms from different titles of Caliber Comics as well as a brief appearance in The Crow feature film. 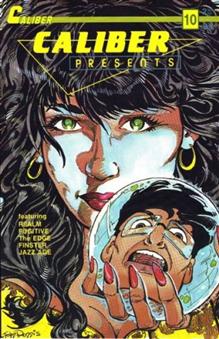 The next great anthology concept series in waiting