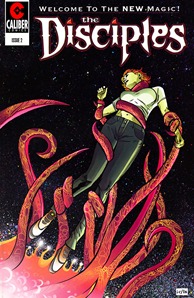 “Smart, sharp, and dynamic.  The Disciples is one of the most impressive debuts I’ve seen in a long time.” - Katherine Keller, Sequential Tart

“I’m really impressed with the total package of The Disciples.  This is really a promising debut to a series and if they keep this up, I think this may be one of the next big, talked about series from Image.” - Greg McElhatton, iComics.

“What is required of me as a reader is to keep up with this exciting and powerful series!  Like I said before…WOW!” - Paul Dale Roberts, Jazma Online

“A contemporary story of warring magical societies, the comic is thoroughly researched, skillfully told and expertly drawn. Reminiscent of early Vertigo (but without the angst), THE DISCIPLES is a prime example of intelligent, dynamic comics.” - Ninth Art, Role of Honor for Best New Series.

“…hook you into the story with rhythmic, contemporary dialogue and intelligence that exudes from every pore.” - Ray Tate, Line of Fire Reviews

“The combination of art and color-work in the title marks The Disciples as different in a market where certain styles proliferate, or where the mainstream streamlines, this art is distinct.” - Remote Induction 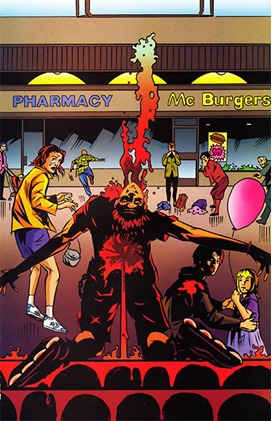 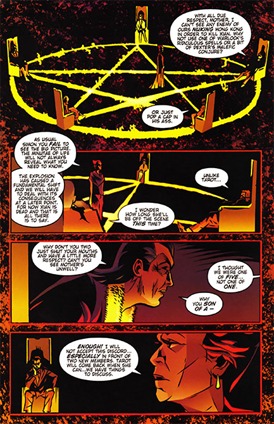 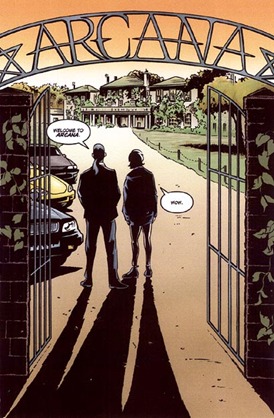 She is rumored to be the most powerful of all the magic users, she is an ancient looking woman but still very young internally.  She claims that she is dying but she’s been saying that for the last 35 years.  Widow of a wealthy 1920’s Senator (one of the main sources of income), she lives in a huge New Orleans plantation style house which is a character in of itself, full of dark and mysterious rooms including a basement-garage with a number of old and strange vehicles in it.  There is also a huge room full of 1000’s of threads running from one old calendar to another, a huge spider’s web of connected dates past, present, and future.  She is the wise sage of all the magic users and she knows exactly what is going on but doesn’t really let on unless she sees fit.

This high powered, youthful Englishman with his shock of black hair and strong dark features is the spokesperson for all things Chaos, the leader of the “young Turks”.  Warlock loathes him and believes him to be nothing more than a con-man charlatan, but Simon prefers to be known as a Chaos Tactician.  Never far from his laptop with satellite, and his high tech accoutrements, his often bizarre sense of humor and ironic detachment mask an extremely clever and manipulative modern magician.  Although irreverent to the old guard, he cares as much for his magic family as anyone.  Mother rarely intervenes between Simon and Warlock as they argue the pros and cons of their r belief systems-after all, they are all her “children”.

Elegant Las Vegas showgirls don’t come much more useful than Eden, as a highly experienced and practicing Chaotician, she is very adept at shifting probabilities.  This makes her both highly attractive and dangerous at the same time and she ahs to be very careful to cover her tracks.  Simon finds her extremely attractive but Eden is too cool and calculated when it comes to men, reflecting the experiences she has had with them in the past.

His full name is Charles “Warlock” Masterson, and this gaunt cadaverous looking man would like to think of himself as second in command of the “Old Guard” after Mother, but his name is more of a sign of disrespect by that others than a compliment to his powers.  A master of many arcane techniques, his main specialty is the ability to auger and divine, extremely handy when one considers his profession as a Police Coroner.  He uses the ancient arts to foretell of future events with the entrails of the recently departed, and, as such, does have a powerful function within the hierarchy of the team.

At the beginning, Susanne Albion is a simple MTV watching mall rat who already uses her astonishing abilities in short, sharp bursts, showing an immaturity with her power.  Potentially as powerful as Mother in years to come, she’s clueless and carefree when we first meet this 14 year old, but as the imbalance caused by the Templars kick in, she becomes the focus of a malevolence that threatens no just her juvenile existence but the life of the world.

Good friend of Eden, she is unusual in that she fits neither the Old Guard nor the Young Turks.  She has the limited ability to control people, especially men, but it is unclear as to whether she uses a kind of traditional stage hypnosis or something much more scientific and chaos based.  Psiren has a great deal of potential lying under her very well adjusted and highly intelligent persona.

Myron Raleigh, known as the Great Myron, was once an incredibly popular TV magician who has now fallen out of public favor after the suspicious death of his assistant wife.  Wealthy, but now intensely lonely, he is paying a high price of the arrogance of his earlier years when he not only turned his back on the Old Guard and the Young Turks, but nearly brought about their complete exposure as true magicians.  Once a year, as many members as possible meet from the two factions in order to discuss many issues, Myron always attempts to get back into the fold.  But each year, he is refused.

She is an 18 years old Goth wannabe Vampire, complete with capped incisors to give that authentic vampire look.  Ambrosia does however, have some modest power of which she is unaware and this is why Myron has employed her as his new assistant, much against the wishes of just about everybody.  Ambrosia is very streetwise but has extrapolated that knowledge in a mistaken belief that she knows what the world is all about…but she is wrong.

A gang lord is a gangster, a Miami gansta, if fact.  While Myron used his powers to line his pockets through entertaining, the Shakespeare/Ebonic hybrid talking and ruthless crime boss used his darker shade of powers to get where he wanted.  He favors the nastier elements of traditional magic such as Cuban Voodoo and mixes it with Chaos to get what he wants.  He is very feared outside although the members of the group have little terror of him and in fact, Mother, finds him very amusing as he is always full of respect and small talk (he loves to gossip about celebrities).  He claims he is willing to sell his soul to the devil but seems to have a code of ethics when it involves others of his kind. 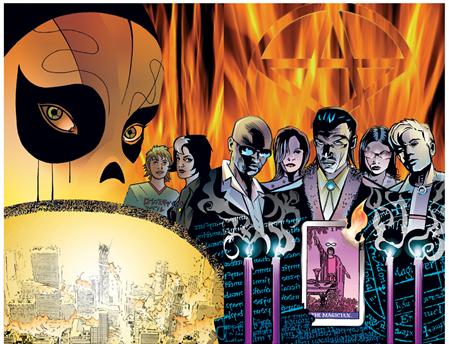 Format: Hidden groups of societies in the vein of Underworld, Twilight, Highlander and Buffy the Vampire Slayer with a diverse team of individuals forced to make sacrifices for the good of mankind.

Brief Description: A diverse group of magic users must put aside their differences and band together to stop an ancient order from disrupting the cosmic force of magic and the universe in order to save the planet.

Key Elements: A variety of different magic users each possessing a unique skill; a team concept; an evil corporation of madmen associated with the Knights Templar with their own agenda; horror, fantasy and limited science fiction.

So, you think you know the truth about magic? Wicca, Voodoo, Chaos, Tarot…call it what you will…but it is much different that believed. This isn’t the old school of speaking in rhymes and staged theatrics, there are fundamental elements at work on our everyday lives so powerful, so dangerous, they threaten to tear the very fabric of reality asunder.

But who guards us against this impending onslaught? The Disciples, a misfit group of seers, magicians, and wielders of the Black Arts whose own internal politics pose as great a threat to their survival as any outside influence.

The Disciples consists of a core group of members and are occasionally joined by more transient members. There is a division between the past and present as the “Old Guard” have a more traditional belief system based on magics such as Crowley, order of the Golden Dawn, and witchcraft. The newer "younger" element practice the Chaos magics and are referred to as the “Young Turks”. The two groups are very divergent and opposed to the beliefs of each other.

At the end of the day however, together the magical factions are the “good guys” and even though their beliefs differ about how they produce an effect, the fact is that they can both produce an effect. The new group, the Chaos magicians believe, with their loose system and complex rituals, that anyone can produce an effect. The Old Guard believe however, that one has to be born with it, predisposed, and utilize their inherent potential. In other words, you either got it or you don’t.

The villains are the Knights Templar...in their new incarnation. Formed from the Order of the Psion (which was the military side of the Templars), they have created a hidden corporation which controls a vast amount of power and money across many different holdings. The Templars are planning to bring back their false god, Bahomet and actually feel they have the DNA from that entity which was discovered on an archaeological dig.

The closer the Templars get to recreating their god, the more upset the magical continuum gets - sort of an arcanic ozone layer which is being eroded, and this is craeting an imbalance between chaos and order...between good and evil.

The Disciples, whether they like it or not, are on the front line as their magic can be perceived on two distinct levels - in the human world they can effect change, control probability, perform conjuring tricks, etc - but in the astral plane, the ether of magic, they also can be very powerful weapons. And they are the only ones with this ability.

And the Knights Templar want it. 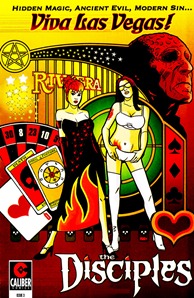 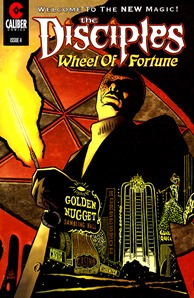 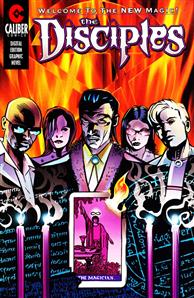 All media and publishing rights available