"(Andrea Molinari) has retold the story of Perpetua, Felicitas, and their companions in a way that goes well beyond what historians can do. The result is an engaging work that may lead readers to understand the spiritual and political struggles that led Perpetua and her companions to die so bravely in the arena of Carthage."
- Joyce E. Salisbury, Ph.D.
History Professor Emerita,

A historically accurate tale of a young woman and her companions who stood bravely against the persecution of the Roman Empire.

HBO's ROME meets Gladiator. 'Perpetua was a martyr (d. March 7, 203), a mystic and, interestingly enough, the first known woman Christian writer. She left behind a diary that outlined her personal experiences, feelings and visions as she languished in prison, awaiting her execution. Sometime after her death, a Christian eyewitness to these brutal events edited her journal and appended additional relevant materials such as a vision recorded by one of her companions and a ‘blow by blow’ account of the martyrs’ final moments in the arena. This work is known as the Martyrdom of Perpetua and Felicitas.

Climbing the Dragon’s Ladder, is a fictional attempt to expand on the Martyrdom account in a way that is historically, theologically and culturally sensitive to the early third century A.D. For example, the scene that depicts an early Christian baptismal ceremony is directly dependent on Tertullian’s treatise, On Baptism (ca. A.D. 205) and the ancient Christian liturgical source, Apostolic Tradition (ca. A.D. 215). Tertullian, a theologian and Church father, lived in Carthage during the exact period in which Perpetua’s life and death took place. Apostolic Tradition represents the first extant baptismal ritual of the Christian Church and agrees in many ways with the information found in On Baptism.

Yet another example of the research that has shaped and formed this book can be found in a scene in which Perpetua’s friend and fellow martyr, Felicitas, gives birth. While the biological basics of childbirth are timeless, the author’s research revealed the existence of the first known gynecological manual, written by a man named Soranus of Ephesus and aptly titled, Gynecology. This manual describes in vivid detail the processes and procedures by which an ancient Greco-Roman physician or midwife might go about facilitating childbirth. Interestingly enough, Gynecology dates from ca. A.D. 180 and thus would likely represent the training provided to those involved in helping Felicitas.

In short, this novel presents actual historical events — both the events of Perpetua and her companions’ life and martyrdom and those of the larger historical period — and weaves a believable back-story of ordinary men and women who are caught up in events that test their faith, their commitment, and their relationships with those around them. This is a story of faith under fire, of courage in the face of terrible loss and deprivation and of the human will to hope, even when things are at their darkest.

This novel is also unique in that it is an illustrated novel. The author, working together with the artist (Tyler J. Walpole), has created thirty-two original and historically accurate paintings. Many of these pieces are dedicated to illustrating the incredible visions of Perpetua and represent the first systematic attempt at accomplishing this feat.

The novel begins on March 7, 203. A Carthaginian teenager stands in the doorway of his father’s tavern and watches as the gladiatorial pompa (roughly equivalent to a modern parade) passes on its way to the amphitheater.The procession includes politicians, musicians, gladiators and condemned criminals. Among these is a group of young Christian martyrs. As fate would have it, the teen makes eye contact with the young woman Perpetua and feels compelled to follow her to the arena. The youth takes advantage of his familial connections and gains access to the martyrs. As their final minutes tick away, he converses with them and then witnesses their terrible deaths. The combination of their verbal testimony and their spectacular courage in the face of the terrors of the arena set a chain of events in motion that lead to the boy’s conversion to Christianity. Now, decades after Perpetua’s death, the teen has become a Christian deacon. His immediate situation is that a terrible persecution has broken out as the result of the imperial edict of the Emperor Decius (ca. A.D. 249-51). The deacon now sits in prison and awaits his own execution. Faced with such a fate, the man’s mind turns back to his youth and the example set by the martyrs. It is in this situation that he tells both what he experienced and what he learned about the martyrs in the years following their martyrdom.

The Body of the Work —

The primary story opens months before the execution with the events that surround the martyrs’ initial arrest and temporary detention in Perpetua’s family villa. Perpetua is only twenty-one with an infant son who is still breast-feeding at the time. Other martyrs include her brother, Fortus, and the brothers Saturninus and Secundulus, who are friends of the family. Lastly, the group is rounded out by a slave-couple — Felicitas, who is Perpetua’s handmaid and pregnant by her partner, Revocatus. Perpetua’s husband, Saturus, is away in Italy on business at the time of the arrest. He will figure prominently in the story as it unfolds.

In the period after the arrest, the novel depicts the impact of this situation on the martyrs and their families. It is here that the reader is first exposed to Perpetua’s father who, while loving his daughter deeply, works hard to dissuade her from her confession of faith. Here too, Perpetua’s brother, Fortus — himself also under arrest — clashes with his father. Perpetua’s family situation begins to take shape, through a series of flashbacks to her younger days. Meanwhile, the story in the ‘here and now’ progresses with a description of the baptism and full initiation into the Church of the young converts. This development allows the reader to ‘meet’ the historical Church father, Tertullian, and become exposed to the inner workings of the third century Church in terms of ritual, teaching and leadership structure.

After the baptism, the martyrs are transferred to a gladiatorial training school that serves as a temporary holding facility for the prisoners. As the young people languish under the terrible conditions of the prison, Perpetua begins to long for the comforting arms of her husband, Saturus. As Perpetua struggles with her feelings of loneliness, the reader is introduced to the ‘history’ of her and Saturus’ love through her reminiscences. Finally, Saturus, who has received word of the situation, arrives in Carthage and speeds to the assistance of his wife and friends. Subsequent chapters outline the martyrs’ trial and condemnation by the Roman Procurator Hilarnius and Saturus’ choice to surrender to the state authorities, thereby joining his companions in their condemnation.

The real test now comes for Perpetua and the martyrs. The period between the trial and the execution brings a spate of challenges including Perpetua’s separation from her infant son, the segregating of the male and female martyrs into separate holding cells, the death of one of the men as a direct result of the fetid prison conditions, and the isolation imposed on the prisoners by their captors.More of Perpetua’s past is revealed as she grapples with intense feelings of loss.

Finally, because the day of execution is drawing close, the prisoners are transferred from the gladiatorial school to the military prison, where they are reunited as a group. Perpetua’s joy at being reunited with her love, Saturus, is short-lived. This is a result of the camp tribune’s fears of the martyrs’ rumored ‘magical’ powers. As a result of the tribune’s paranoia, living conditions in the prison are unbearable. Perpetua must ask the adjutant in charge of the prison, a decent and sympathetic man named Pudens, to set up a meeting with the camp tribune so that she can beg for better treatment. Though tense, the meeting does bear fruit and the martyrs are given respite from their confinement. They are allowed to entertain visitors and, most importantly, the opportunity to walk about in the prison yard.

The final chapter narrates the grim details of the martyrs’ execution but also makes apparent the strength of their friendship and the depth of the courage and faith in God. The book ends as the narrator himself grapples with his own feelings of sorrow and frustration at the strength of the forces of evil in this world. The lesson gleaned from the example of Perpetua and her companions is applied to his situation and, by implication, that of the modern reader. 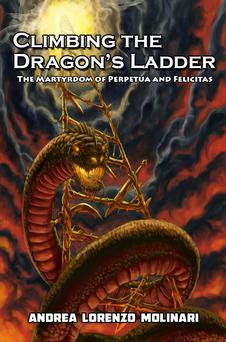