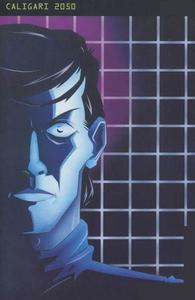 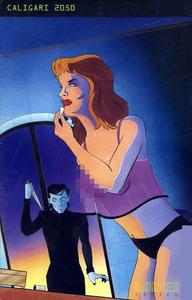 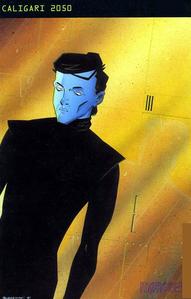 A futuristic horror tale of intrigue and mystery

Published as a 64 page comic issue

In the year 2050, the machinations of a corrupt government and those of a city’s financial/political leaders create the power of population mind control.

But one of the inhabitants of New City is apparently still acting under his own control and he is killing the evil backers of a company called Sigmark Industries...one by one. What or who, is causing the somnambulist, Caesar, to stalk the night in search of his next victim?

Caligari 2050 is a take on the German silent film, The Cabinet of Dr. Caligari. Set in an industrial film noir future, Caligari 2050 is a story of dreams and death...of images and love...of a voice crying from the machines.

It just may be the future.

Brief Description: Caligari is a sci-fi horror story set in the future as an unwitting individual pawn seemingly murders at the command of someone...or something.

Key Elements: A dreaded future that casts its own evil into the series. A murderer who may just be a victim.

Association: As the mystery unravels, fans of such works as The Matrix and of course, the base material....The Cabinet of Dr. Caligari will find instant appeal.

Format: Caligari 2050 has been released as a 64 page story with an ending. The comic series creator feels that a new version or film could have the dramatic punch elevated as he was experimenting with a minimalistic style for the publication.

Additional: Most agree that Caligari 2050 is a great concept but the execution in a visual medium could be far more interesting.  This could be something like The Crow movie but one in which the protagonist is a murderer, yet can be entirely innocent. 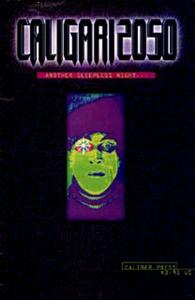