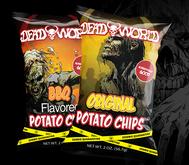 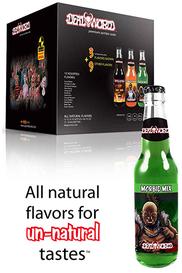 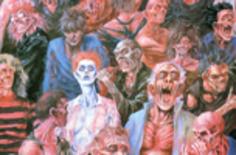 Mixing two of the hottest genre - YA and Zombie Horror!

“I like Reed's style of injecting some humor, along with tense and surprising moments. There are some scenes that are pretty grandiose and I would even say worthy of a film. Reed really brings it in "Deadworld: Restoration" #2” – Comicmonsters.com, Christine Caprilozzi

"The story is turning out to be something pretty special. I mean it really is spot on and knows when to change past and add something new and fresh to the story. I mean it was just something that was literally the coolest thing that I have read in comics lately so that is nice. I also like the take on the whole Zombie genre. It’s not traditional in any sense of the word. It is very chill and relaxing. I like it a lot. The art is spot on. It’s dark and edgy and know exactly what it is doing. I really enjoy that part of. Overall, I give it a 5 out of 5."

Every time I pick up an issue I am always surprised at how dark the series is, and that isn’t a complaint by any means. It’s got a sick and twisted turn to the story that is really inventive and at moments is a little uncomfortable to read. I loved every second of it. Being lost in this issue is a little like having a fever dream after bingeing on Italian zombie movies from the 70′s. A chilling and effective combination. Much like issue one, this one still looks like it was written after the apocalypse on bits and pieces of what was found. It left me at least with the idea that this really was a labor of love, like some lost wandering soul finding what they can to get this story down. Even the coloring lends to this feeling, with it all looking like it was done with blood, mud, sweat and coffee. 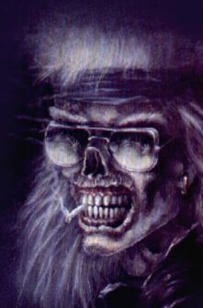 "This is the original zombie comic and it's easy to see why it's lasted so long." - World's Heavyweight Comics

"This is a fantastic zombie book. Makkonen has an insanely terrifying style, the writing is beautiful...it's like reading a nightmare."- Drunk on Comics

"...remarkably literate and starkly imaginative, and is a winner in every scene, in every shot, in every line of dialog." - The Lottery Party

“If you like zombies, horror, and/or post-apocalyptic stories you should definitely be checking this series out.” – Comicspectrum.com

“You must get this if you're even a casual fan of horror or anything zombie or undead-related. It's clear The Walking Dead took some cues from this book (some of them honestly seem like blatant rip-offs), so go support a book that got the zombie genre right first.” – Comicbastards.com

“Plain and simple, you need to read Deadworld, old and new, because it is at the top of my list of Horror Comic Must Read Titles. - Dying Breath 5.0 out of 5.0" – DecapitatedDan.com

“Deadworld: Restoration #1” Comic of the Week – Work In Comics.com 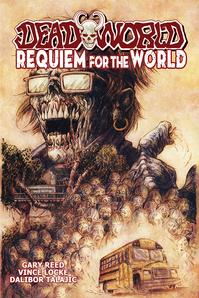 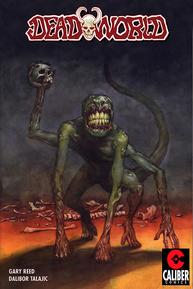 Earth has suffered a supernatural holocaust. Isolated pockets of humanity struggle to survive against a seemingly endless and mindless horde of zombies that have effectively taken over the world.

Deadworld initially begins with its focus on a group of teens who are unsure of their plight. Is it regional? Or indeed something that is occurring all over the planet.

They feel overall confident that they can survive in this new world against the slow moving “geeks” but then something happens that shakes their confidence to its very core.

Intelligent zombies. Led by a Harley-riding, chain smoking, sarcastic and sadistic leader dubbed KING ZOMBIE. Now the teens realize that they are no longer the master race and at the top of the food chain...they are now being hunted down as “warmies"...simply food and game for the zombie masses. And these intelligent zombies have the ability to control and lead large groups of what was first thought to be purposeless random moving zombies.

But the teens come into contact with an individual called Deake who claims he was involved in briefly opening a dimensional “gateway” which allowed this evil to come into our world and unleash the supernatural nightmare. However, having escaped King Zombie, the leader of the dead wants Deake back to finish the job and open the portal permantently allowing the full evil to consume the Earth and be under King Zombie's rule.

Can this ragtag group of teens and one unhinged adult prevent the "gateway" opening permanently? Or will they join the dead in walking the earth till the end of time.

Deadworld: Where death is only the beginning of the horror. And thus the groundwork is set to tackle and present a ‘zombie’ horror/action/adventure saga from a totally different perspective.

Promo trailer for War of the Dead series

The story opens with the world already having found itself plunged into a supernatural holocaust of unknown origin. Pockets of humanity struggle to survive with little communication among the groups. The fate of the rest of the world is unsure, they can only hope that whatever affected their area was only regional.

The dead had come back to life. Zombies walked the earth but somehow these seem different than one might imagine. These zombies almost seem to have a purpose. When it was discovered early on that there are some intelligent zombies, the humans realize the menace was far greater than the cheezy late night movies had portrayed.

The opening cast of characters are placed in Louisiana. A group of teens, purposeless, wandered aimlessly with no idea of where to go or what to do beyond the simple act of surviving. This group runs into a trio of intelligent zombies and succeed in killing two of them. The surviving zombie would prove to be the most dangerous of humanity's enemies. He was pegged with a name early on that has stuck and hence we were introduced to King Zombie. And he along with other intelligent zombies have the ability to control the wandering zombie masses when they wish.

After the encounter with King Zombie, the group runs into a degenerate fugitive. To their surprise, they find out that the almost lunatical individual called Deake, had been involved in an arcane scheme to open a portal to another dimension. Deake, with the help of a demonic book, had the innate capability of being a "gate-opener", and he released the restraints of this portal that allowed an evil to enter our world and revive the dead. However, the full opening of the "gateway" was aborted and only a partial amount of the undead energy entered this world. Deake, through no skill of his own, managed to escape the clutches of King Zombie who wanted him a prisoner in order to fully and permanently open the gate.

King Zombie, thwarted thus far receives help from the other side as a continued sliver of the split between the two dimensions permitted limited access to specific and horrific demons. The 6-appendage mighty Grakken have been brought over to aid King Zombie in his quest and their speed, strength, and ferocity are more than a match for any human. Deake and the teens at one point are attacked but the teens end up being rescued by a para-military organization.

For the first time since the dead began to walk the earth, the teens felt a sense of hope. The para-military organization seemed efficient, were fully armed, well equipped and had a sense of order and purpose to deal with the zombie threat.

Then to the dismay of the teens, they discovered that they were nothing more than prisoners of the group who had twisted plans for them.

The on-going published stories deal with the humans surviving the zombie menace as well as each other and King Zombie's search for a way to open the gateway and destroying the remaining humans. In addition, a small band of Lepers are introduced, victims of a bizarre experiment to be used against the zombie plague; an individual called The Voodoo Queen also arrives on-scene and competes with King Zombie for control of the zombie horde; more horrific demons cross the gateway into this world; some humans meanwhile elect to work with the zombies in order to save themselves; and the introduction of single-minded human, Dead Killer, gives King Zombie a more than a worthy opponent to deal with.

And all this occurs in just the first dozen comic issues!

Brief Description: A world that is suffering a supernatural holocaust. The dead have come back to life and they’re controlled by an unknown force...in the shape of intelligent zombies who have an agenda to rule the world.

Key Elements: Horror, action, adventure, and a future world where mankind has almost turned against itself in a multi-layered story. Not your typical paint-by-numbers 'zombie' story.

Association: Obviously, many would liken it to the popular George Romero movies but Deadworld brings much more to the table than a one dimensional Us vs. Zombies tale. It has the feel of Red Dawn as small groups stand against an invading onslaught. It has the despair of Mad Max and The Walking Dead as civilization has crashed and the people band together to form friendships and enemies. But it has an Evil Dead menace as 'something' from the otherside wants into this world to destroy the old and rule the new. And it has the Nightmare on Elm Street type-horror as a charismatic King Zombie unleashes his own terror, toys with the humans, and walks (and rides his Harley) to his own beat and agenda.

Format: Deadworld has had over 100 comic issues and graphic novels released with plenty of back story to tap into. The series continued December 2013 from IDW Publishing with a 5-issue story arc. With King Zombie, a Harley riding, chain-smoking sadistic and sarcastic lead villain being so "personable" and engaging, Deadworld has the potential to launch the next "Hollywood" iconic villian franchise character (think of a character straight out of Sons of Anarchy) with a television series or film franchise. Events can be explored as they occur now with flashbacks to what happened to these characters to just before and when the nightmare began.

"...amongst the most essential horror titles of the last twenty years." - Peter Normanton, From the Tomb magazine

"The best, in my humble opinion, of the zombie comics." - Tom Snigoski, Buffy the Vampire Slayer

"This is one heck of a disturbing book and I'd definitely recommend it to new and old fans alike." - Paul Milligan, They Live to Serve

"The revival of Deadworld continues to swelter into a huge blockbuster in the making." - Kenneth Gallant, Broken Frontier

Deadworld is not just a zombie story, it is a story of survival and human perseverance. As the characters we come across struggle to adjust to this new world...this Deadworld...they will find the true nature of humanity as well.

And it isn't necessarily a pretty sight. In a real world (even one that is set in a fictional setting such as this), it is expected that not all humans will have the same agenda...and not all humans will instantly bond with each other against a common menace.

Dead Tales: collection of back stories

Dead Killer: collection of back stories

Dire Wolves: A Chronicle of the Deadworld

Roadkill: A Chronicle of the Deadworld

Deadworld: Requiem for the world 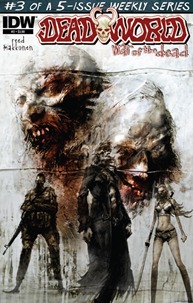 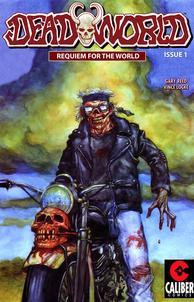 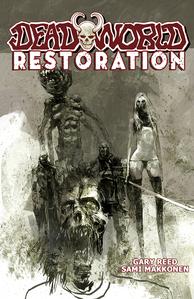 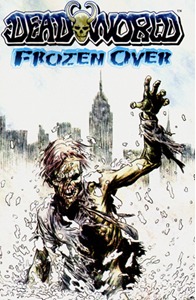 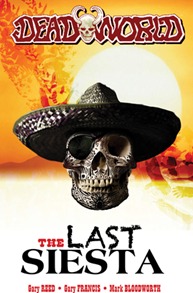 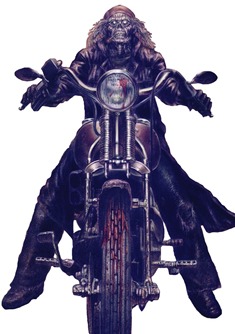 The critically acclaimed godfather of all zombie comics tackles the undead menace from a new 'supernatural' viewpoint. An action-filled, horror series that made its first appearance in 1987, 15 years before the Walking Dead. Over 100 comic issues & graphic novels of back story to entertain horror or even non-horror fan.

* Ideally suited for television or film.